The Day I was Conferred an Honorary Degree from Solent University 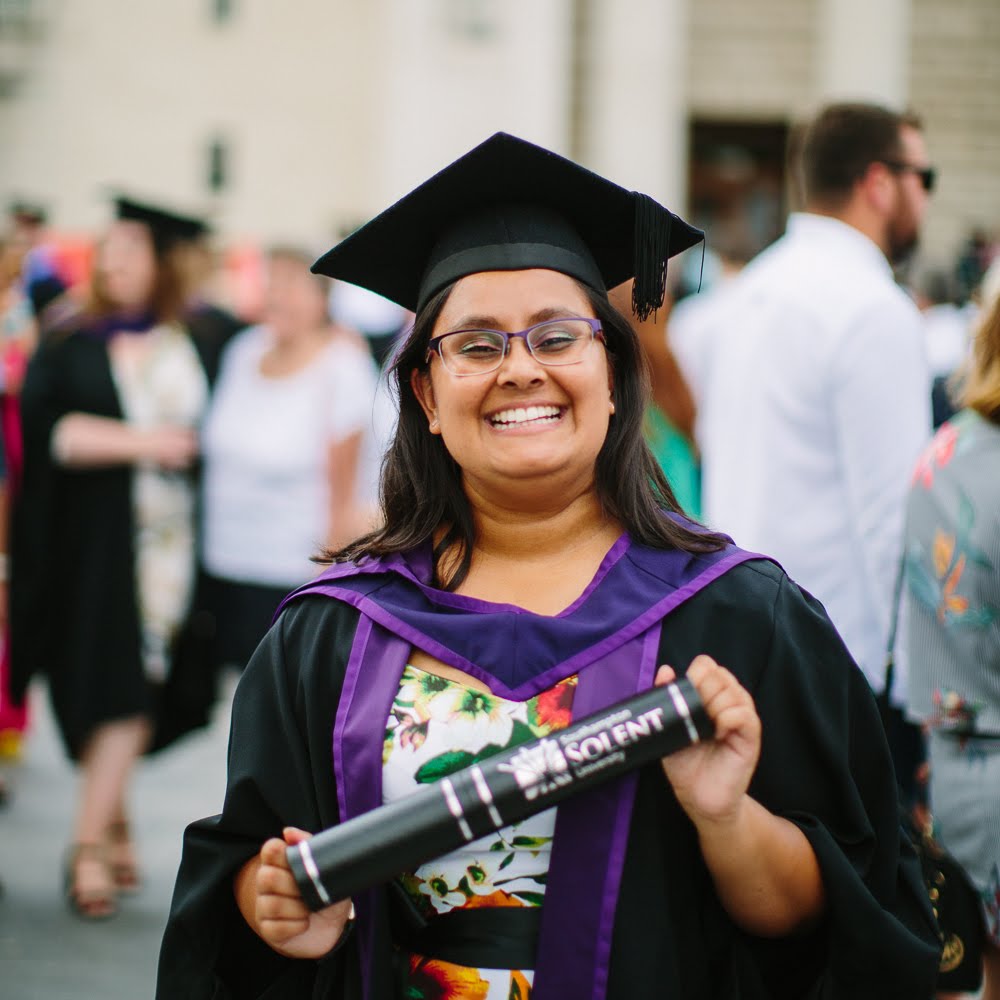 Eeeeek! I’m very excited to share some amazing news that I’ve had to keep quiet for 4 months!


So Monday 9th July was a pretty memorable day and certainly one I won’t forget in my life. It’s been a day I’ve been excited and nervous about for the past four months, as it was the day I received an honorary degree of Master of Arts from Solent University. Being one of the youngest honoraries at Solent University to receive such an award is something I would not have dreamed of so early in my career, especially just celebrating a year of going full-time freelance today! Hooray! I still feel I’m only getting started with my business, so I’m stunned to have been acknowledged by my University in this way. It’s one of those things where it still feels pretty surreal thinking about it.

I’m still taking it all in… feelings of delight, jubilation, astonishment even a fortnight after the graduation ceremony, I’m still pinching myself that I really DID receive an honorary degree. It feels even more special as the Academic Board of Solent University, the university I graduated from in Bachelor of Arts in Photography only 4 years ago, would confer such an esteemed award especially as there are only 10-20 honorary degree recipients per year at the University during Graduation Week. 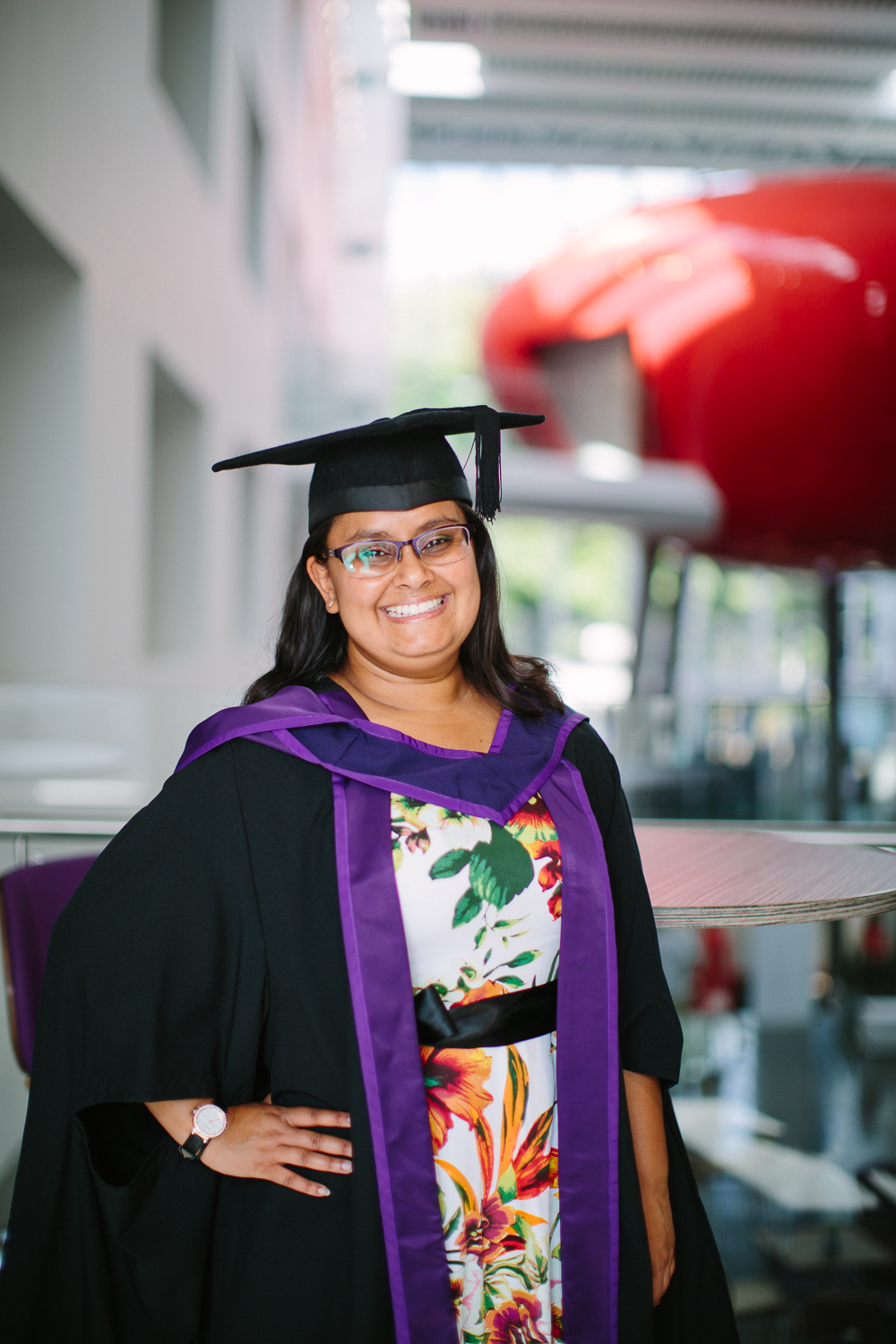 When the letter came in the post in February from the Vice-Chancellor, firstly I was shocked and had to read the letter ten times to make sure it was posted to the right ‘Nisha Haq’, then I cried a little as an overwhelming feeling came over me as I realised it was legitimately addressed to me. This was a huge honour to receive esepcially just turning 25 and remembering of all the hardships I’ve had to go through was all worth it to have that letter in my hands. The fact that it read ‘this is in recognition of your outstanding accomplishments and commitment to photography’ really hit home for me as it’s something I’m so passionate about and worked so hard for.

In April I received another letter informing me that I would have to give a 3-5 min speech at the Graduation ceremony at Southampton Guildhall which at first seemed exciting then I remembered how many graduates, parents & faculty there would be watching on the day (plus a live stream of the ceremony online!), the nerves definitely kicked in! The past month my life had been consumed by watching graduation commencement speeches (particularly in America – I feel British Universities don’t share it on Youtube!) such as Steve Jobs, Oprah, and JK Rowling to inspire me. After lots of sleepless nights of worrying what to put in my speech, a couple of days before the ceremony it just came to me and I knew what I was going to say. I just had to be myself, share stories of my own experiences and the many ups and downs I’ve faced and not worry that I didn’t have 30/40+ years of industry knowledge and wisdom like many honorary graduates would typically have. I just had to remember I am unique in my own way and share what I knew and learned in the short 3 years of running a business. All you can do is to be yourself.

So the big day finally arrives, my partner Rob, mum, brother, dad and step-mum all travel down from Somerset & Nottingham for this special day. It meant a lot to me having my closest loved ones to celebrate the day with me, especially as I speak about my family in my speech. I also realise I’m the first person out of all the recipients receiving an honorary degree to give a speech as it’s the first ceremony to kick off graduation week! Although extra nerves kick in, I stick to my trusty cue cards and I’m ready to get on stage for the speech I’ve been worrying about so much. 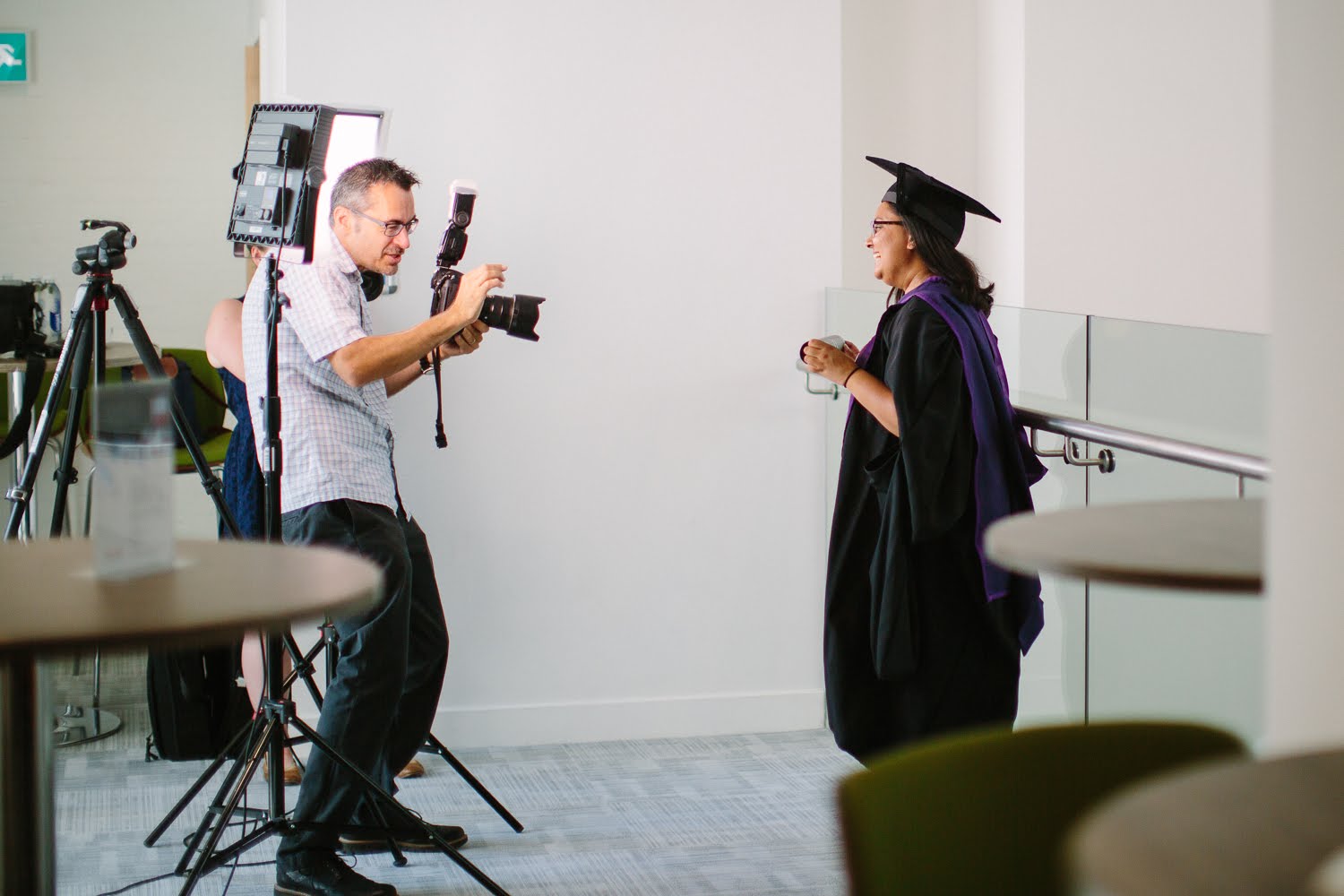 If anyone was curious about what it’s like to receive an honorary degree from a university, I’ll try my best to describe what it’s like. Through the midst of shock, excitement and nervousness, I do remember moments such as putting on my robes and cap and a strange feeling of it being déjà vu as it only felt like yesterday that I was graduating with my BA Photography degree. I had to remind myself this is entirely different and what to expect would be entirely different too! Soon after putting my gown on, I was interviewed by the press team for a snippet on how I was feeling and any words of advice to students/graduates. It was still pretty early in the morning and being the first one to arrive at this point, I thought I’d just go for it and try and mumble some words of inspiration, though the nerves of the speech I had to deliver later in the day was still making me sweat (the black polyester gown on a 30°c day didn’t help mind you!) You can decipher if you feel inspired by my video clip below:

Next, I had the privilege of having a formal photograph with the Chancellor, Admiral The Right Honourable Lord West of Spithead and Vice-Chancellor Professor Graham Baldwin, both very tall gentlemen with little me at 4”11 in the middle for a photograph beaming with pride. Then I had a photograph with the director of the School of Art, Design & Fashion, Professor Peter Lloyd who was one of the members to nominate me for the award (as well as Robert Wayman, Alumni Relations and Philanthropy Manager who nominated me). Such a friendly and funny gentleman and really put me at ease throughout the whole day which made it that extra bit special. I’m often the person behind the camera, so to be in the front for lots of formal photos was a new experience for me! It was also lovely having a family photo, which made me really happy.

Now for the scary part of the day, the ceremony! My family and I were split up as they had to take their seats and the faculty, distinguished guests and honorary recipients would be sitting on the stage in front of all the graduates, their family and friends. We were all placed in a specific order when queuing up for our entrance so we could easily take our seats into Southampton Guildhall. As the last to take our seats, a loud cheer and round of applause were made with upbeat live music played us in for our walk to the stage. All I could think of was not to stumble up the stairs in my 4-inch heels (I’m thinking at this point I definitely should have worn flats!) Unbeknownst to me I would be sitting in the front row under bright stage lights in front of everyone to see. It was pretty daunting but comforted by the fact I was sat next to Professor Peter Lloyd. For this particular ceremony, it was all the graduates from fashion courses that were receiving their degrees and what a wonderful group of graduates it was! Peter and I had a little giggle as we had the optimum view of everyone’s amazing shoe choices (I wouldn’t expect anything less from the school of fashion!) and all the glamorous heels. 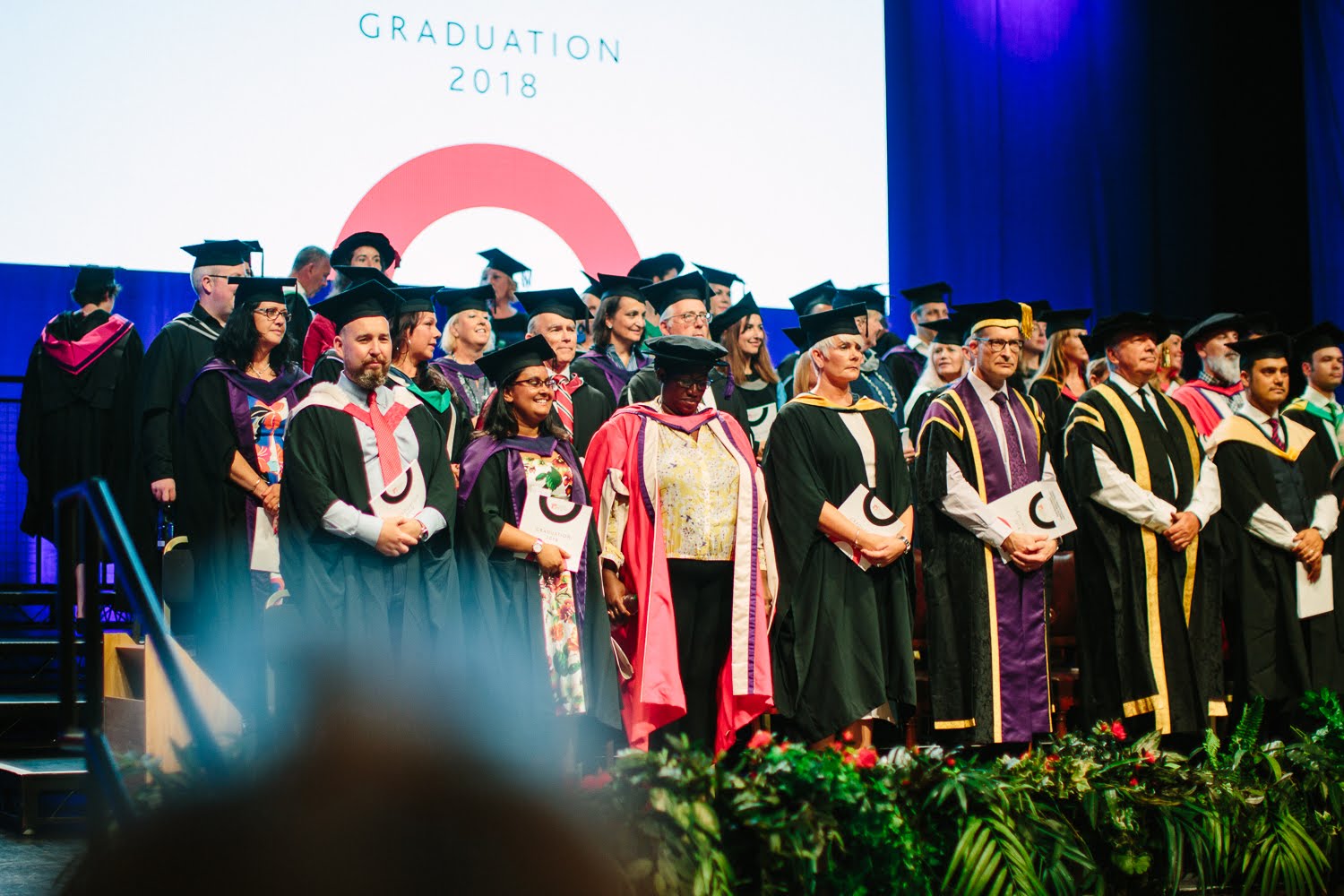 After all the graduates had received their degrees, it was time for my speech! My palms were definitely sweaty at this point and I’m trying to keep my cool, as this was the moment I was anticipating. Peter stood up behind the lectern and read a citation about me. Just hearing my name being said in a speech to a room to hundreds of people, if not a thousand and having my accomplishments, the work I do and what I’m passionate about being shared with everyone was an emotional moment for me especially knowing my family & my partner was in the audience. It filled me with so much pride. 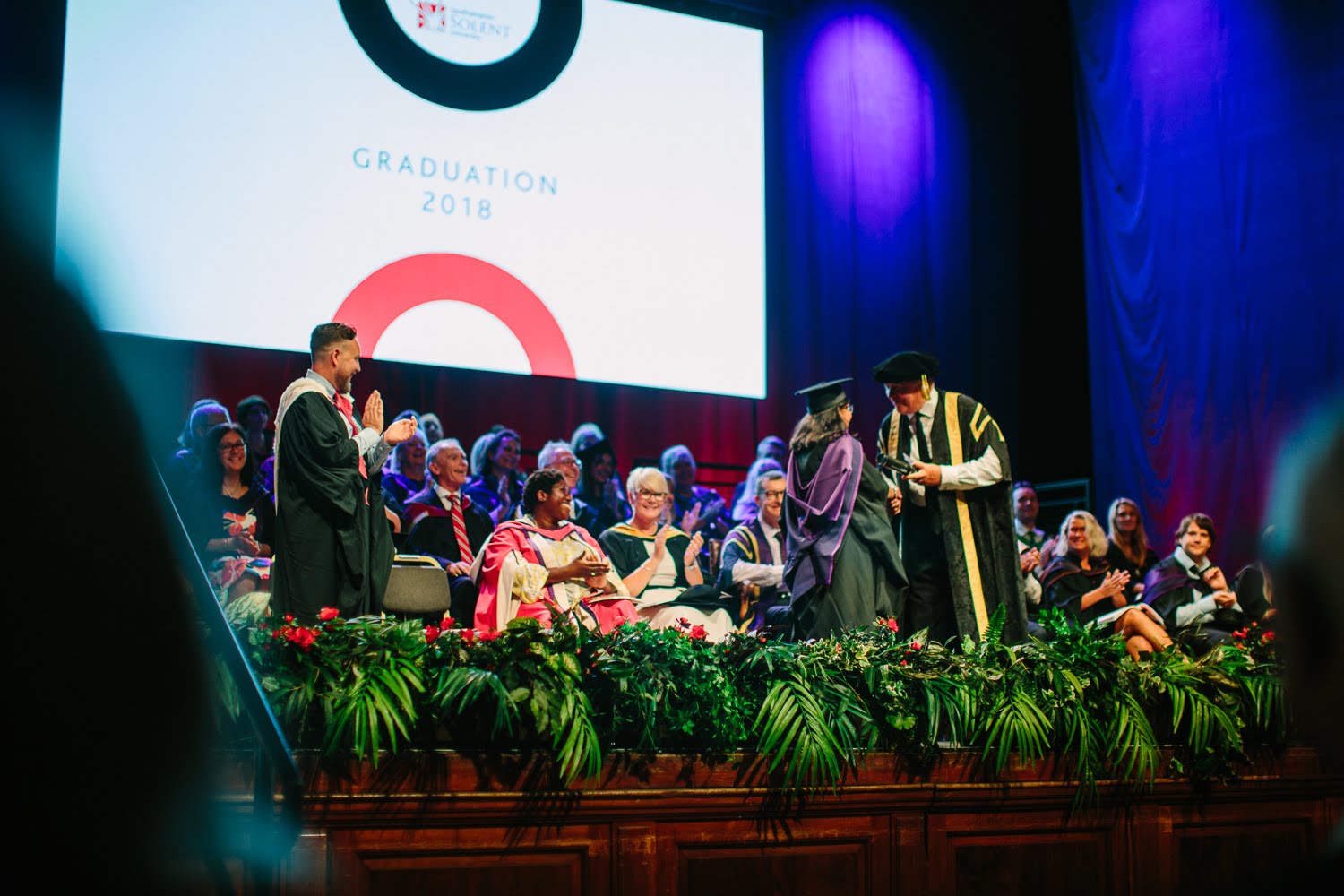 I was announced to receive my honorary degree of Master of Arts and shook hands with the Chancellor and invited to share a few words. I was so honoured by it all and despite the heat, bright lights and nerves, I felt so happy and proud, I went into the speech feeling fearless. I told myself, ‘I got this’ to give me a little confidence boost. It paid off practising a few times and delivered my speech as rehearsed with an extra bit of oomph thrown in. I was delighted I didn’t make any hiccups  and got through it one piece! I was over the moon! After my speech, award-winning beauty journalist Ateh Jewel received her honorary degree of Doctor of Media and delivered an amazing passionate speech, which was so inspiring to hear. Just being awarded in the same ceremony as she was with all her amazing achievements was humbling. 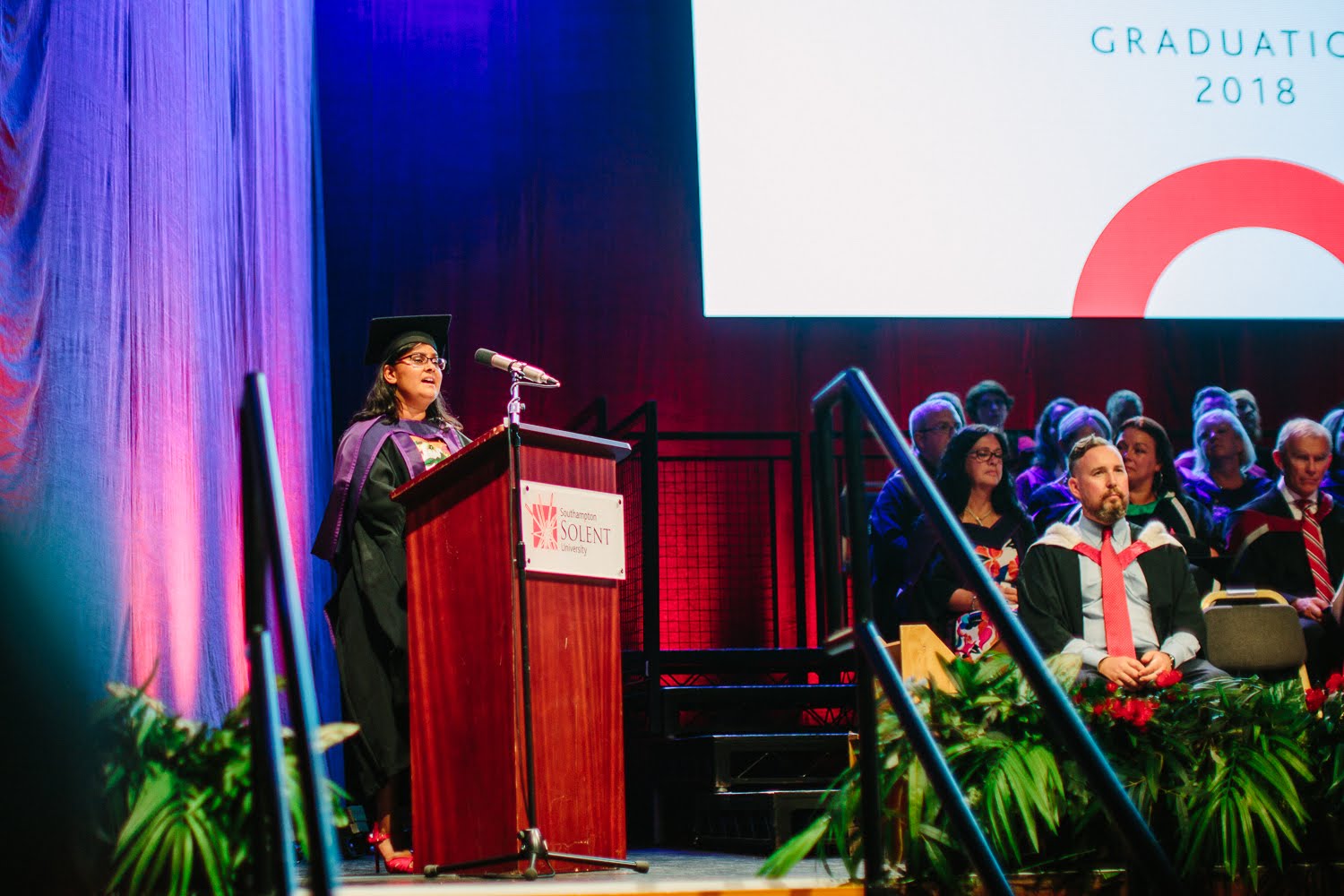 The ceremony was coming to an end and all I could think of was, WOW, this is an insane experience and I couldn’t have had a bigger smile on my face. I was pleasantly surprised when we made our exit how many parents shook my hand as I walked down the aisle and congratulated me and even said they were proud of me. This coming from people I’ve never met before really moved me as I wasn’t sure how the audience would react to my speech or whether they would be fussed at all about who I was. To have that reception was truly amazing and I never thought I could inspire people in that way. If I can encourage the new generation in becoming creative freelancers & entrepreneurs in any way, I feel I’ve done a good job as it’s something I’m so passionate about. I think it was affirming for parents to see their daughters and sons graduate from Solent University, which isn’t a traditional ‘red brick’ university and more renowned for it’s enterprising and industry-focused courses, and that if a Solent girl who graduated 4 years ago can be up on that stage, then their children can have a pretty amazing career too. Congratulations to the Class of 2018! 😀

There should never be any limits on what you set out to achieve and that you can be successful in whatever career you choose. In my case, anyone can be a #girlboss. 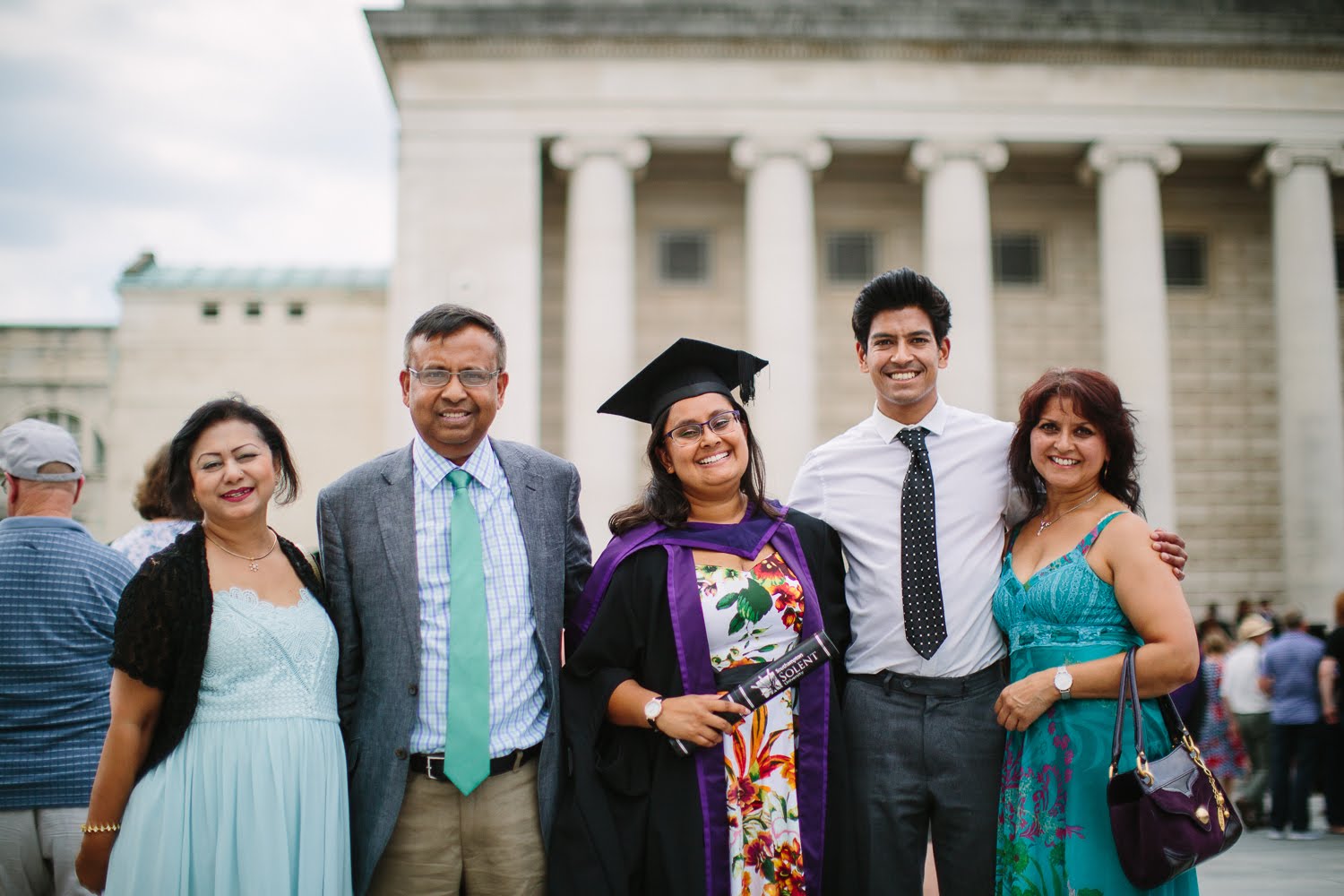 I’d like to say a BIG thank you to everyone who has supported me and helped me on my journey to where I am today, my amazing clients who believe in me, my family and friends who love me, my wonderful partner Rob who encourages me and to everyone who inspires me everyday to keep pushing and working hard for those goals and dreams to happen.

You can read more on this story on Solent University’s press page:

Feel inspired? Read more about being a #Girlboss!

Shortlisted for the UK Wedding Awards 2018!